What drives emcees to continue producing, continue recording and continue writing? What launches a person into the world of hip-hop? I’ve always conjectured that at its core, hip-hop culture derives itself from conflict. Some of this conflict is internal. Rappers initiate their quest from the inside out, searching for their greater meaning as they draw upon personal experiences where they faced trials and tribulations. And yet others find themselves drawn to the external struggle, scorned by the eternal presence of injustice and exploitation that chips away at a person’s soul. What no one can deny is that hip-hop is salvation. It becomes a catharsis where musical expression is a non-traditional method of healing. Or it at times transforms into a means of activism. The three tapes I’ve included below run the gamut when it comes to the emcee’s search for artistic integrity. But each album chooses pieces of the struggle, ranging from the impoverished come-up to the inhumanity of being  a black individual in a distant “post-racial America”. Each is at once hip-hop’s deepest roots of conflict, and at the same time the evolution of the music over the last 40 years.

I first listened to Kemba while reading Michael Eric Dyson’s book The Black Presidency: Race and Politics of Barack Obama. Published in early 2016, Dyson’s portrait of Obama is peppered with criticism but also a persistent sense of optimism. Kemba, formerly known as YC The Cynic and hailing from NYC, dropped Negus six months later, days before the Dallas shootings led to an outpouring of rage that inundated American streets. When I listened to Negus while reading The Black Presidency, it quickly became a contrast of presentations, a sharper form of rage that felt at home with books like Between The World and Me but more distant from The Black Presidency. Kemba does not beat around the bush on Negus. The cynical and brutally honest bars and choruses that fill his album provide a glance into the subconscious of the black man and the black woman in the United States. The listener is thrust into Kemba’s world with a false sense of optimism in its opening minutes–a soaring image of a resilient black child rising from the embers of poverty–when the music transforms into a darker reality. Negus provides a categorical rejection of the status quo. It rails against the systematic suppression, the debilitating self-hatred, and the subservient pacifism that are engrained in the black psyche. It strives to deliver a racial awakening that, different from that of Dyson’s, will not be pretty or peaceful. Negus surely could have been entitled something less raw, something less of an affront on white sensitivity. And yet it embraces a vilified word that is weaponized, both an object of hatred and an object of self-love. Throughout Negus, Kemba is delivering a stark commentary that black folk should never compare themselves to white folk, never believe that a rising tide will lift their boats as high as the white folks’. The political establishment can only meet its objectives when the people force them to. The album’s gritty production bounces through street chants and brings beats that imagine people marching angrily through the streets. While the tape seems to end on a high-note, and the crown placed above the child’s head symbolizes hope, Negus distills the rage of 2016 well, even before the presidential election. Much like YC The Cynic’s propensity to question the status quo before his name-change, Kemba seems even more adamant to stick to that message: Black folk are still going to be black folk regardless of the political parties, regardless of the president and regardless of piecemeal policies. As Ibram X. Kendi once said “The only thing wrong with Black people is that we think something is wrong with Black People.” Negus conveys that sentiment and then some. Be sure to download it today. 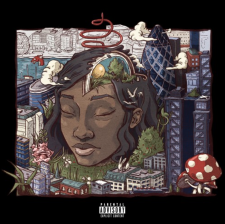 Little Simz came across my radar over two years ago when she dropped E.D.G.E., which was an impressive release for someone of only 20 years of age. Simz ended up joining the burgeoning London hip-hop scene, as the stream of good music coming from across the pond increases. I was pleased to see that Simz followed up her first mixtape release with a formal album with Stillness in Wonderland. Apropo for its title, Simz chooses to use Alice in Wonderland metaphor as a passageway into her musical journey over the years and the many temptations that come along with it. Like any unexpected trip through a dream, we are exposed to Simz’s unconscious and her identity as a holistic human being, rather than just the emcee. And like any journey, the beats are lush and rich, creating dream-like soundscapes to remind us that we are, in fact, in wonderland. An apt comparison is  the production behind Cunninglynguists 2012 album Oneirology, another concept album (one that still sits high on my list of best hip-hop albums). Simz at times approaches her music with unfettered melancholy. She recognizes her faults and pleads with the listener to embrace her imperfections. And at other times, Simz is at the Mad Hatter’s party, popping bottles and celebrating with a champagne-filled euphoria that reminds us of her grind. And still Simz stays genuine and presents her celebration cautiously. She is an astute observer and knows the risks posed by selling out. However, if there is anything that can be said about Stillness in Wonderland, it’s that Little Simz will not deviate from Little Simz. She is who she is, imperfections and all. All we have to do is take her up on the offer to come along, and accept that choice.

Madison, Wisconsin is not known to be a springwell of hip-hop music. As a city most recognized for the University of Wisconsin, the teacher union standoffs and the more benign presence of cheese-curds & butter burgers, it has historically been the hip, progressive section of Wisconsin. Most music from the state hails from Milwaukee except for the recently resurgent Bon Iver (from Eau Claire). So when Madison-based hip-hop emcee Trapo dropped Shade Trees a few months ago, needless to say, I was quite surprised. Trapo performed at Pigeons and Planes “No Ceiling” show last June, and had previously released The Black Beverley Hills EP in 2015, showcasing the very young midwest rapper’s skill on the microphone. Like other recent artists, Trapo smashes through an unspoken tradition that has separated rap from singing by blending the two together, and producing an undeniably unique sound. With a raspy voice, and crooning pipes, Trapo marries his own style with incredibly diverse production. Beats blend into one another, sometimes becoming a tapestry of white noise deep in a remote forest and at others returing to the raw intensity of hardcore hip-hop. The former is present on tracks like “Hello” while hte latter is evident on tracks like “Riot”, Trapo’s collaboration with Saba. At the end of the day, his album is an experiment that sits at the crossroads between love and ambition. Trapo has an uncanny aptitude to channel love, developing a soundscape of sentimentality and serenity that can sometimes feel nostalgic. And then just as we’re sucked in, its back to the boom bap that hip-hop purists will enjoy. Trapo, at only 18, certainly has a very bright future ahead of him and I’m excited to see what comes next. For now, stream his album today or pick up a copy on iTunes.