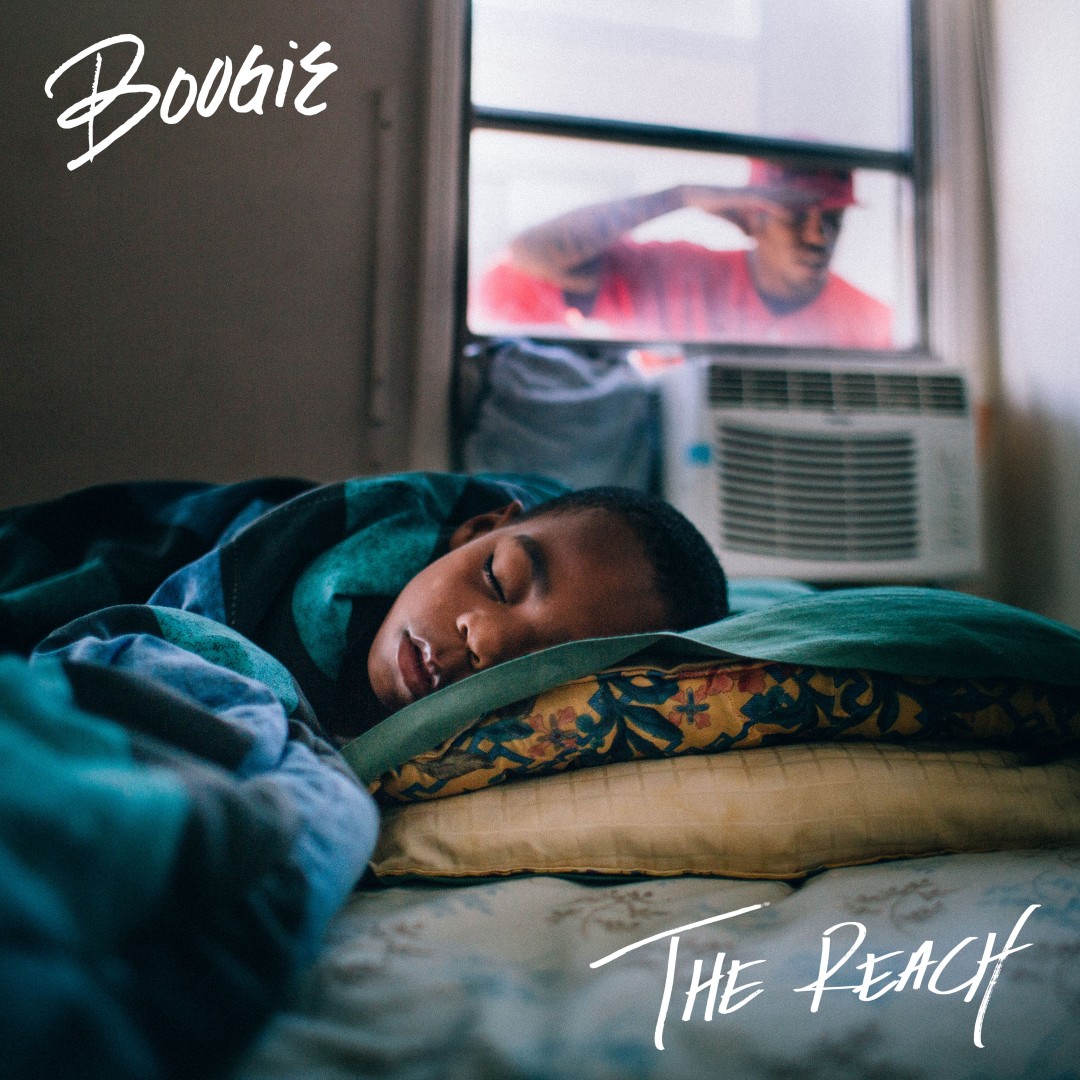 It is freakin’ hot outside today.  It was hot out yesterday and it’s going to be hot again tomorrow.  Shit, at this point it’s been downright toasty for nearly two weeks.  Summer in New England is a roller coaster of weather, ranging from pleasantly cool evenings to oppressively humid afternoons that pave the way for massive thunderstorms.  Occasionally, you’ll even have a bona fide heat wave, when endless days of thick, muggy, blistering heat bleed together until our residents become hermits in their air-conditioned apartments.

Much like a New England heat wave, the hip-hop world at times experiences a surprise spike in the number of dope albums released in a short period of time.  The last four weeks have undoubtedly had a significant number of quality releases and surprise discoveries (some of which I’ll be dedicating to another blog post of “Between The Cracks”).  From Boogie’s excellent The Reach to Statik Selektah’s incredible journey through a who’s who of today’s dopest underground emcees on Lucky 7, I’ve been really enjoying these sweaty July days.  There were other notable releases that didn’t make the cut, including Chester Watson’s very bizarre Summer Mirage and the quick strike three track Fundamentals EP put out by Onra.  Even Substantial dropped an insanely dope joint with his Always EP with Algorythm.  The five track EP continues Substantial’s rampage towards dropping classic hip-hop jams with head nodding flows, insightful bars and bass-thumping beats.

Of course there was the more entertaining news that Action Bronson and Ghostface Killah traded verbal blows in an ESPN commentary and followup YouTube video, respectively.  The beef was chronicled by a number of blogs and cultural rags, and even Azealia Banks jumped on the bandwagon wishing that Bronson would “get fucked up so badly.”  I attended Boston’s own hip-hop festival in July, having the chance to see a slew of hip-hop artists from the Boston area flex their lyrical chops.  Akrobatik, Edo G, and Termanology did their thing, while my personal highlight was having the chance to see REKS perform live.  He did not disappoint.

Anyway, take a look at the best jams from the first part of this summer and enjoy! 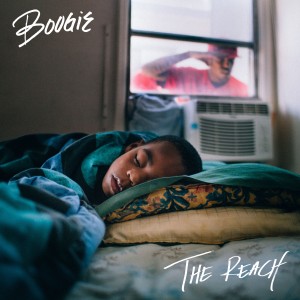 Last year, Long Beach native Boogie dropped the Thirst 48 mixtape which was well received among rap circles and included an array of poetic tracks and hard-hitting jams about Boogie’s life in Long Beach.  Despite having listened to it a few times, I’m regretful to admit that I snoozed pretty loudly on this tape.  Looking back at my Best Listens of June 2014, I clearly neglected to include Boogie’s mixtape on the honorable mentions list with Your Old Droog taking the gold for that month.  Thankfully, due to my girlfriend’s suggestion, The Reach avoided musical purgatory on my iPhone, and received some much-needed spins.  It’s an eclectic tape that features stellar production and more importantly, a much more nuanced view of family life in the city and navigating the street’s challenging landscapes.  In the same vein as Kendrick’s Good Kid, M.A.A.D. City, Boogie attempts to reconcile his own impulses towards embracing a dangerous street-lifestyle with some understanding that values and his family are what matter most.  Boogie seems to acknowledge the many contradictions of his upbringing and his existence which carry through in his near spoken word tracks and emotional flows.  I found even myself tearing up on some of the songs.  This one will surely stay in the summer listening list as I continue diving deeper into Boogie’s world.  Do not sleep on this one! 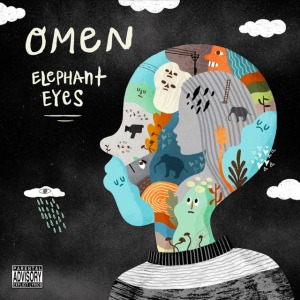 Omen has been remarkably quiet these last three years, and news of his Elephant Eyes release damn near blew up the hip-hop blogosphere this past month.  Omen hails from J. Cole’s Dreamville label, which as many know, is a quintessential hip-hop factory.  With his three year hiatus since his last formal album, 2DopeBoyz nearly had a heart attack as his album dropped.  For some reason, I missed the Omen train, which made me dig back into the digital crates of the internet to look up some of his previous work, and boy-oh-boy is it impressive.  The Chicago emcee/producer has quite the canon of music, and he blends beautiful lyrics and beats together seamlessly.  Elephant Eyes continues this tradition and builds upon it with additional vocal work and Omen tackling some interesting themes from fatherhood to love, exploring his time in the limelight and his community.  There’s a humility and honesty to Omen that feels familiar, and the project has clearly received the J. Cole polish, sounding remarkably well-put together.  If you’re hunting for a project that is consistent throughout, and marries both creativity with refinement, this will definitely be worth copping. 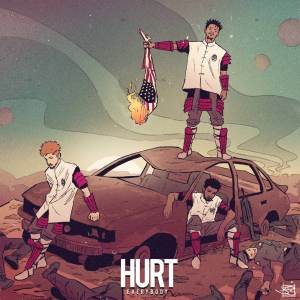 With a name like “Hurt Everybody”, and a post-apocalyptic cover featuring an American flag on fire, you can assume that 2K47, the newest release from the Chicago trio, airs on the darker side of hip-hop.  I was first acquainted with the group after hearing the track “Gang” which popped up on my SoundCloud feed a few months ago.  Despite expecting the predictable formula of hardcore hip-hop, I was immediately intrigued when Mick Jenkins opened the verse with “This is really a song about being with all of your friends”.  Somewhat of a counter-argument to Donnie Trumpet & Chance The Rapper’s upbeat album Surf, “Gang” is more about operating as a gang of friends, or a gang of economically downtrodden accomplices, engaging in subversive activities that wouldn’t hold up with the establishment.  The rest of the album follows a similar tone, and employs some very bizarre, futuristic production that at times can be almost unsettling.  Yet the forward thinking tone of the album, and the unique structure make it an exciting listen each time I’ve jammed to it.   The themes range from the depressing realities of growing up in Southside Chicago to hollering at the honeys, yet it all manages to tie together well.  Be sure to download!

“Say It Here, While It’s Safe” 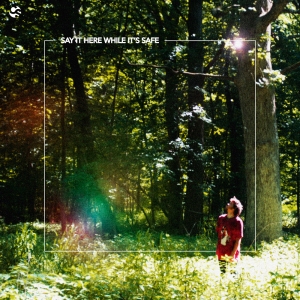 Kweku Collins is definitely not your average emcee.  Somewhere between the world of hip-hop and reggae, somewhere between singing and rapping, somewhere between the urban jungle and the overgrown forest, you’ll find Kweku meandering aimlessly.  His album randomly came onto my SoundCloud stream one morning and I was immediately hooked on his sweet crooning over some fast-hitting verses.  Collins’ sound certainly conjures up a Wyclef Jean or even a Chance the Rapper, and he channels a raw emotion that reverberates throughout the tracks.  There’s a sense that Collins’ could have advanced into higher education or pursued some other creative endeavor if he so chose, but like so many other hip-hop-inclined emcees, he felt that his passion for music was an inevitability.   On “Howl”, Collins’ discusses his push to go against the grain, avoiding school or groups of friends that might stymie his creative ambitions.  Finishing off the tape is “Love It All”, produced by Boathouse, an amazing track that ties together the ethos and feel of the album: Collins’ embrace of the good and the bad, the process and the product, the creative journey and its many challenges.  Be sure to give this seven track mixtape a spin! 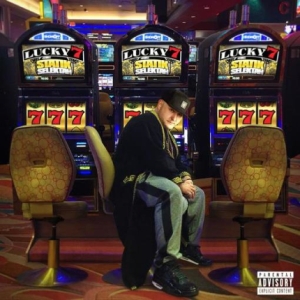 I’ll be the first one to admit: including Statik Selektah’s album may seem like an unconventional choice, but dude’s latest release has been an amazing journey through the catacombs of the up and coming underground scene.  Statik’s beats have always been some of the best in the hip-hop world, expertly lacing together soulful samples, break beats, and of course, way too much stylish scratching.  The man channels the musical fathers of hip-hop, and from DJ Stretch Armstrong to Pete Rock, his songs seem to be at home in the 90s or the 2010s.   And, it’s readily apparent that all of the emcees that provide their lyrical meat for his sample-laced bones are well aware.  From Your Old Droog to Action Bronson to Sean Price to Mick Jenkins, each emcee seems to be at his best, dropping their verses over intricate and head-nodding beat after intricate and head-nodding beat.  There’s really not much more to describe here: it boils down to dopeass emcees spitting some of their hottest bars over the best beats all manufactured by the ever astute Statik Selektah.  Enough said.